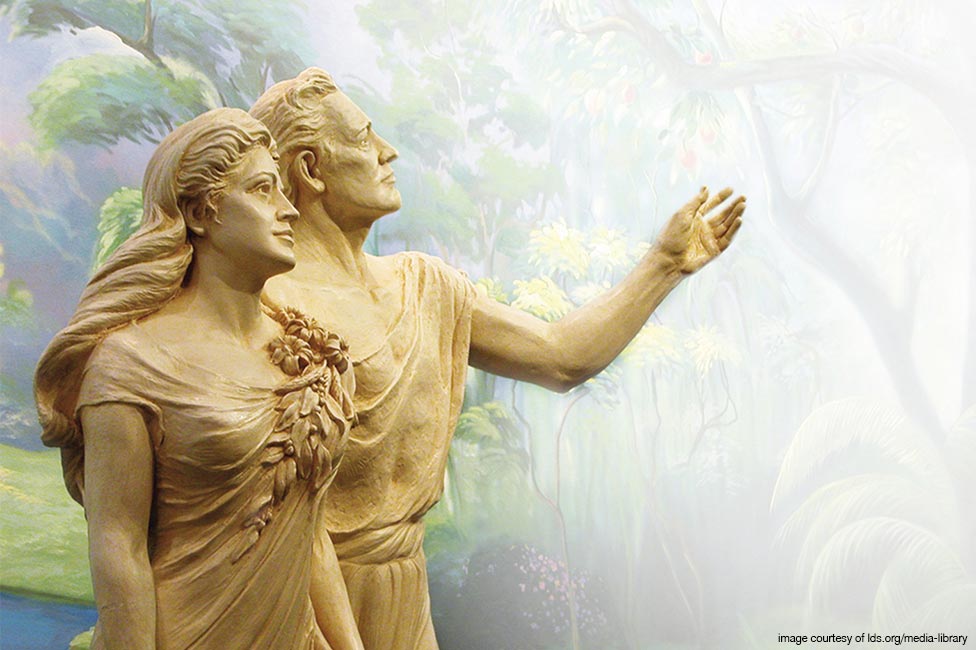 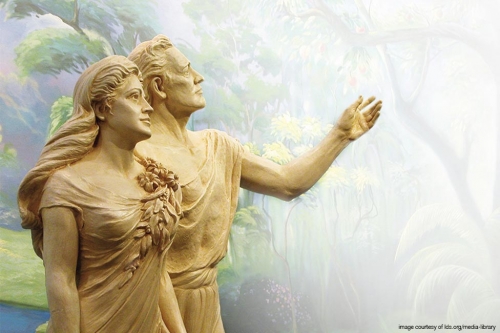 I was recently listening to a political debate about whether there are only two genders or if there are more. On one side was a person advocating two and only two genders, on the other side was a person putting forth the position that there are infinite genders. I realized, as I listened, that I need to be teaching my children what the gospel of Jesus Christ says about gender and gender roles to combat what they are certain to hear at school and elsewhere in the public discourse. My wife suggested that this is also a topic that missionaries need to understand and be prepared to answer, and I agreed.

The Definition of Gender

Merriam-Webster’s first definition of gender is one word, “sex” as in the biological sex, male or female, of a person or animal. Wikipedia, on the other hand, has a different, and much more complicated definition of gender, which is reflective of modern times and the direction the world is heading. Says Wikipedia, “Gender is the range of characteristics pertaining to, and differentiating between, masculinity and femininity. Depending on the context, these characteristics may include biological sex (i.e., the state of being male, female, or an intersex variation), sex-based social structures (i.e., gender roles), or gender identity.” I should note that Webster also provides a secondary definition of gender along the same lines of that described Wikipedia.

Historically, gender has been the equivalent of biological sex, male and female, but in a relatively new phenomena gender is now considered by some to be a social construct or how an individual identifies, regardless of biology. I believe this changing and complicating of the definition of gender is another example of the world losing “plain and precious” truths as described in 1 Nephi Chapter 13.

From the LDS Church’s perspective, gender is straight forward—male and female, as defined in the first book of Bible and in the Family Proclamation. Genesis Chapter 1 talks about how God created the earth and on the sixth day “God created man in his own image, in the image of God created he him; male and female created he them” (Gen 1:27) In The Family: A Proclamation to the World, our modern prophets have said: “All human beings—male and female—are created in the image of God. Each is a beloved spirit son or daughter of heavenly parents, and, as such, each has a divine nature and destiny. Gender is an essential characteristic of individual premortal, mortal, and eternal identity and purpose.” 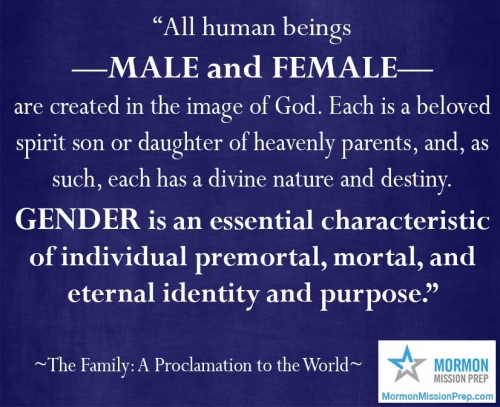 Since followers of the restored gospel of Jesus Christ and the world may have different definitions of the word gender, missionaries need to be aware of these differing opinions and be prepared to respectfully answer questions that could arise. Missionaries should not argue with people about this topic, but as the opportunity arises and as prompted by the Holy Ghost, they should simply state that the Church maintains the traditional definition of gender—biological sex, male and female.

I won’t devote much time on intersex (people born characteristics of both biological sexes), transgender (a person whose personal identity does not correspond with their birth sex/gender), gender dysphoria (feeling one’s emotional and psychological identity to be opposite to one’s biological sex), or other disorders of sex development. This is because I am not a medical doctor or psychiatrist, nor do I have authority to give the Church’s official perspective on these subjects. Still, missionaries should be aware of these terms and know that these conditions exist.

There are a wide variety of intersex conditions cause by numerous circumstances such as genetic, chromosomal, and biochemical factors, and enzyme deficiencies and no one seems to know exactly how frequently they happen. These intersex conditions are rare, though, with estimates ranging anywhere from 0.01% to 1% of the population being affected. But the vast majority of people will carry either XX or XY chromosome pairs, women being XX and men being XY.

Missionaries should know that intersex and other sexual development conditions are legitimate physical, mental, and emotional issues that some people deal with, and they should treat the subject seriously. It is important to treat people who have questions about these subjects with love and respect, though generally missionaries should not allow themselves to get bogged down in discussing these topics with others. The missionary’s time should be devoted to fulfilling their unique purpose, to preach the gospel and invite others to come unto Christ through faith, repentance, and baptism.

Missionaries should treat people with kindness and understanding who bring up this topic. If pressured to provide more answers, missionaries should direct people who have serious questions about the Church’s stance on these gender identity issues to Church bishops, stake presidents, or mission presidents. Missionaries may also want to point them to the Mormons and Gay website. While the Church doesn’t say much on these subjects publicly, on that website they do say: “Many of the general principles shared on this website (for example, the importance of inclusion and kindness) apply to Latter-day Saints who experience gender dysphoria or identify as transgender.”

People may wonder why the LDS Church is so firm in their stance of gender and the reason is that our roles as men and women deeply rooted in our doctrine. We believe gender is an important part of our eternal identity and it plays a major part in our duties and mission on earth. We believe that men and women are different, each with unique talents and characteristics that together complement each other and make each other whole. Genesis 2:24 says “Therefore shall a man leave his father and his mother, and shall cleave unto his wife: and they shall be one flesh.” 1 Corinthians 11:11 teaches that “neither is the man without the woman, neither the woman without the man, in the Lord.”

Modern revelation received by the prophet Joseph Smith confirms that husbands and wives need each other to be saved in the Celestial Kingdom of God. “In the celestial glory there are three heavens or degrees; And in order to obtain the highest, a man must enter into this order of the priesthood [meaning the new and everlasting covenant of marriage]; And if he does not, he cannot obtain it” (D&C 131:1-3).

Referring again to the Family Proclamation, we see that men and women have different God-given roles and responsibilities.

“By divine design, fathers are to preside over their families in love and righteousness and are responsible to provide the necessities of life and protection for their families. Mothers are primarily responsible for the nurture of their children. In these sacred responsibilities, fathers and mothers are obligated to help one another as equal partners.”

Elder David A. Bednar of the Quorum of the Twelve Apostles said:

“Two compelling doctrinal reasons help us to understand why eternal marriage is essential to the Father’s plan. Reason 1: The natures of male and female spirits complete and perfect each other, and therefore men and women are intended to progress together toward exaltation.”

“…Gender …in large measure defines who we are, why we are here upon the earth, and what we are to do and become. For divine purposes, male and female spirits are different, distinctive, and complementary. … The unique combination of spiritual, physical, mental, and emotional capacities of both males and females were needed to implement the plan of happiness. Alone, neither the man nor the woman could fulfill the purposes of his or her creation” (Marriage Is Essential to His Eternal Plan, Liahona, June 2006).

As I mentioned in the beginning, one impetus for this blog post was because I wanted to prepare my own children for the arguments they will hear win the world and arm them with the truth of the gospel of Jesus Christ on the subject of gender. Therefore, I created the following PowerPoint slide deck which I am gladly sharing with all the visitors to this website. May you have joy and success in raising your children to know their divine purpose and God-given missions on this earth.

A Great Way To Teach The Plan Of Salvation

Missionary Letters to Home that IMPACTS Others
Scroll to top