The missionary tag is a sign of the commission missionaries have been given.  During my mission, several of my companions had a quote from Elder Bruce R. McConkie printed on a poster as a constant reminder of who they were and who they were representing.  It reads: 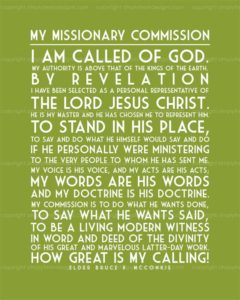 I am called of God. My authority is above that of the kings of the earth. By revelation I have been selected as a personal representative of the Lord Jesus Christ. He is my Master and He has chosen me to represent Him. To stand in His place, to say and do what He himself would say and do if He personally were ministering to the very people to whom He has sent me. My voice is His voice, and my acts are His acts; my words are His words and my doctrine is His doctrine. My commission is to do what He wants done. To say what He wants said. To be a living modern witness in word and deed of the divinity of His great and marvelous latter-day work. (from How Great Is My Calling, an address delivered while Elder McConkie was serving as president of the Australian Mission from 1961 to 1964)

My dear wifey, Heather, has an Etsy shop where she sells digital prints and other inspiring LDS subway art. She has an item in her store of Elder McConkie’s My Missionary Commission. It’s only $5 and it’s available in many colors. Then you can print it at various sizes: 16×20, 11×14, 8×10, 5×7, or 4×6. Frame it and it makes a great gift for current and future missionaries.

In researching what I wanted to say about the missionary name tag, I found the following story from Elder Robert L. Simpson’s talk in the May 1984 Ensign Magazine called The Simplicity of Gospel Truths.

“Few are aware of the pure Christian service being administered at refugee camps in Thailand and in the Philippines by our missionary sisters. Basically, these sisters are restricted to teaching the English language and Western culture, but there is a deeper teaching that takes place through their pure love and sweet attitude toward these displaced people.

The story is told of a young camp refugee from Cambodia who was relocated in California. He found his way into one of our Church meetinghouses because the name of the Church on the sign out front corresponded with the one he used to look at each day on the name tag of the wonderful missionary sister who taught him at the camp. People don’t soon forget acts of simple kindness. Pure love can transcend all differences.” 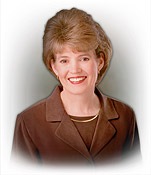 And finally, here is another reminder about the importance of the missionary name tag from Sister Susan W. Tanner’s talk in the May 2007 Ensign Magazine titled Daughters of Heavenly Father.

“Has your mother or father ever reminded you as you were leaving the house to ‘remember who you are’? What do they mean by that?  ‘Remember that you are part of this family, with a reputation to uphold.’ And, even more importantly, ‘remember that you are a child of God and must act accordingly.’ Missionaries wear a badge as a constant reminder that they are representatives of The Church of Jesus Christ of Latter-day Saints. This reminds missionaries to dress modestly and comely, to treat people with politeness, and to strive to have Christ’s image in their countenances. They must do these things because they wear that name tag, an outward sign of their identity.”