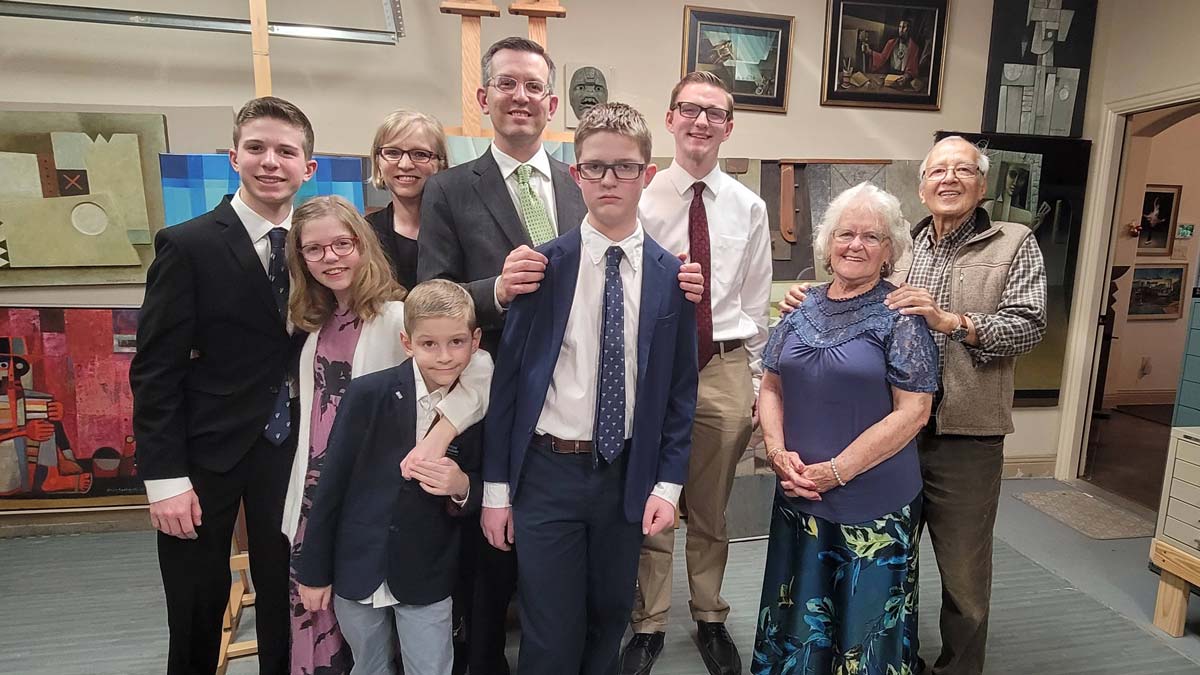 Recently, I had the wonderful opportunity to bring my wife and kids to the art studio of renown artist Jorge Cocco Santángelo. Jorge and his wife, Myriam, and son, Amiel, were so gracious and kind to let us into their home and talk to us and show us the artwork and studio where he creates it. Brother Cocco’s paintings have been featured in magazines and websites of The Church of Jesus Christ of Latter-day Saints over the last few years, therefore many in this audience are likely familiar with his ‘sacrocubism’ style of art which portrays sacred and religious events with features of the post-cubist art movement.

The first time I saw paintings from Jorge, which was just a few years ago, I really enjoyed the new style he was bringing to church artwork. When I found out Jorge was from Argentina, where I served my mission, I began to like him even more.  When I found out he lives not to far from me, well, then I decided I had to reach out and see if I could meet him and shake his hand if nothing else. When I reached out to Jorge’s son Amiel, I got a warm reception and invitation to bring my family to tour Jorge’s art studio. I wasn’t sure any of my kids would be interested in going, except Hannah who is a university art major but unfortunately out of the country serving a mission. As it turns out, however, all the kids were anxious to go, so off we went.

We arrived at Jorge’s home, knocked on the door, and Amiel answered and invited us right in. The hallway inside the front door was lined with paintings, some which we had seen before, but many which we had not. A big section of the hallway was dedicated to sacrocubism paintings from the Book of Mormon. Amiel began talking to my wife and kids in English, while I went and introduced myself to Jorge and Myriam, speaking to them in Spanish…well the best Spanish I could muster after 25 years of minimal practice.

We ended up spending about an hour with Jorge, Myriam, and Amiel. To my surprise, Jorge had lot of styles of art in addition to the sacrocubism, including many abstract pieces, some made with homemade Japanese style paper, and other free-standing sculptures. Jorge doesn’t speak English, so he and I spoke in Castellano (Argentine Spanish). Occasionally, my wife and kids would listen in on our conversation to see what they could understand. At one point, my son Abe came over to me and said he wanted to asked Jorge a question. I thought he was going to ask it to me in English, so I could translate the question into Spanish, but then Abe used his two years of high school Spanish and asked Jorge directly what material was used to create the abstract sculptures. Jorge responded “madera” which I told Abe meant “wood.”

As Jorge was explaining his art and the inspiration and meaning behind it, his enthusiasm and goodness shined through. He first told me about how some of his art is historical in nature, with much built in meaning based on the people and circumstance of the story. Other pieces of his art, however, are abstract, with no connection to anyone or anything specific, yet still full of meaning, though definitely more subjective. Then he explained how his sculptures are like music, which has high notes, pauses, and low notes. So too his sculptures will have high points and low points, gaps and fillings. I’m probably not doing his explanation justice, but it made sense as he explained it to me.

He spent several minutes telling me about one piece of art (I’m not sure if he would call it abstract sacrocubism or a combination of the two) that he said represents how men and women meet and come together. The male and female figures are obvious in the painting, but the table between them represents, he said, how getting together often feels like a game of chance. He also explained that some of the game pieces are like raw and natural rocks, while other pieces are carefully crafted and man-made like the square dice.

While Jorge appreciates allowing other people to find their own meaning in his art, it was interesting to hear him explain the meaning behind several of the pieces:

Before we left we got a family picture with Jorge and Myriam, and I took pictures of Heather and the kids with their favorite paintings. Most of the kids picked sacrocubism paintings of our Savior Jesus Christ or Book of Mormon figures, though Max’s was a different style and Abe’s was an abstract style sculpture of the Angel Moroni.

It was such a great experience to visit with Jorge Cocco, see his paintings and statues, and hear him explain the meaning behind his art. He seems like a good man who is sharing his talents and the Light of Christ with the world through his art. Jorge was so kind to me and my family and so gracious in allowing such a big group to bombard his home for an hour. His wife and son were equally kind and gracious and I could tell this is a family full of much love. We are profoundly grateful for having the experience of visiting with them and pray that God continue to bless and be with them.

Photos and Videos Storage for Missionaries – Our Approach