Blog - Latest News
You are here: Home1 / Preparing to Receive the Melchizedek Priesthood

One of the requirements to serve a mission is for young men to be ordained to the Melchizedek Priesthood which John Taylor, third President of the Church, called “simply the power of God.” (from The Gospel Kingdom by G. Homer Durham) Receiving the priesthood, therefore, is not something to be taken lightly, and all young men should do their duty to prepare beforehand. Four things that all young men can do to prepare to receive the Melchizedek Priesthood are:

Gain a testimony of the restoration of the priesthood 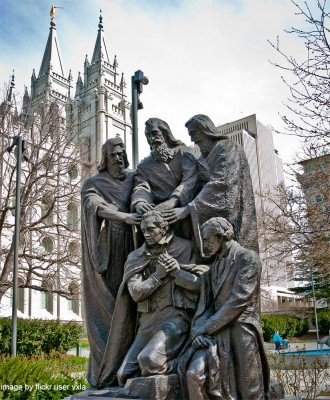 On May 15, 1829, Joseph Smith and Oliver Cowdery went into the woods on the banks of the Susquehanna River and prayed to God with questions about the ordinance of baptism. Their prayer was answered and the resurrected John the Baptist, the same who had baptized Jesus Christ, appeared, laid his hands on their hands, and ordained them to the Aaronic Priesthood. Some weeks later, Peter James and John, all resurrected beings, came to Joseph Smith and ordained him and Oliver to the higher, Melchizedek Priesthood. (On a side note, the Church recently opened a Priesthood Restoration visitors center in the spot where the Aaronic Priesthood restoration occurred.)

Having a testimony, or receiving your own spiritual witness, that these priesthood restoration events really happened is an important part of preparing to receive the priesthood. It is through the priesthood that the Lord does his work, blesses mankind, and administers the ordinances that will seal them up to eternal life. It is a privilege and a blessing to hold the priesthood, and it is also a calling to serve. Missionary work is an inherent part of the duties of priesthood holders. Gain a testimony that the priesthood of God has been restored and you will also know that the Lord will give you the power to accomplish His work.

Receive and Magnify the Preparatory Priesthood

The Aaronic Priesthood is often called the preparatory priesthood because it gives young men the opportunity to perform services that will prepare them to receive the Melchizedek Priesthood, to serve a full-time mission, and to continue in lifelong service to the Lord. President Henry B. Eyring, in his October 2014 talk titled The Preparatory Priesthood, said “the time we are given to serve in the Aaronic Priesthood is an opportunity to prepare us to learn how to give crucial help to others.” Young men who are preparing to go on a mission should take seriously their duties in the Aaronic Priesthood and seek to magnify that calling to prepare themselves for the Melchizedek Priesthood and full-time missionary service.

In the same Henry B. Eyring talk referenced above, he said “the scriptures are so important to prepare us in the priesthood. They are filled with examples. I feel as if I can see Alma following the angel’s command and then hurrying back to teach the wicked people in Ammonihah who had rejected him. I can feel the cold in the jail cell when the Prophet Joseph was told by God to take courage and that he was watched over. With those scripture pictures in mind, we can be prepared to endure in our service when it seems hard.”

“For whoso is faithful unto the obtaining these two priesthoods of which I have spoken, and the magnifying their calling, are sanctified by the Spirit unto the renewing of their bodies. They become the sons of Moses and of Aaron and the seed of Abraham, and the church and kingdom, and the elect of God… And this is according to the oath and covenant which belongeth to the priesthood. Therefore, all those who receive the priesthood, receive this oath and covenant of my Father, which he cannot break, neither can it be moved.” (D&C 84:33-34, 39-40)

Other scriptures you’ll want to focus on are ones that outline specific duties of the offices of the priesthood. Young male future missionaries, who know they will need to be given the Melchizedek Priesthood and ordained to the office of an Elder, can read what the Lord has said are the duties of an Elder in D&C 20:38–45, D&C 42:44, D&C 46:2, D&C 107:11–12, and elsewhere in the scriptures.

Learn How to and Perform Priesthood Ordinances 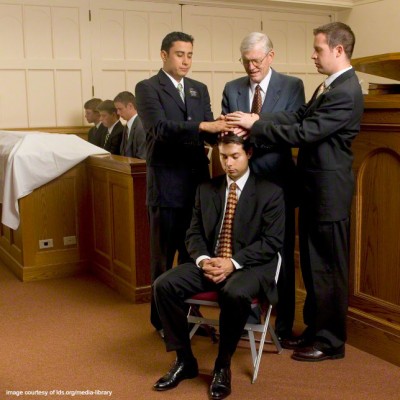 Missionaries are called upon to administer many priesthood ordinances like passing the sacrament, and performing baptisms and confirmations. Additionally, many missionaries are also asked to perform ordinances such as the laying on of hand to heal the sick, consecrating oil, conferring the priesthood, ordaining someone to a priesthood office,  giving blessings of comfort, and other ordinances.

All of these ordinances are sacred acts performed by the authority of the priesthood and should be conducted in a dignified manner. In order to accomplish that, young men should be taught how to do these ordinances and be given the experience of actually doing them whenever possible. Of course, all brethren who perform ordinances and blessings should prepare themselves by living worthily and striving to be guided by the Holy Spirit. You can also refer to the Church’s Handbook 2 or the Family Guidebook for more detailed information and instructions on performing priesthood ordinances and blessings.

Related Article: Young men must be 18 years old to receive the Melchizedek Priesthood

Helping Missionaries Prepare for the Temple – Adapted from Sacrament Meeting...

Obey with Exactness
Scroll to top