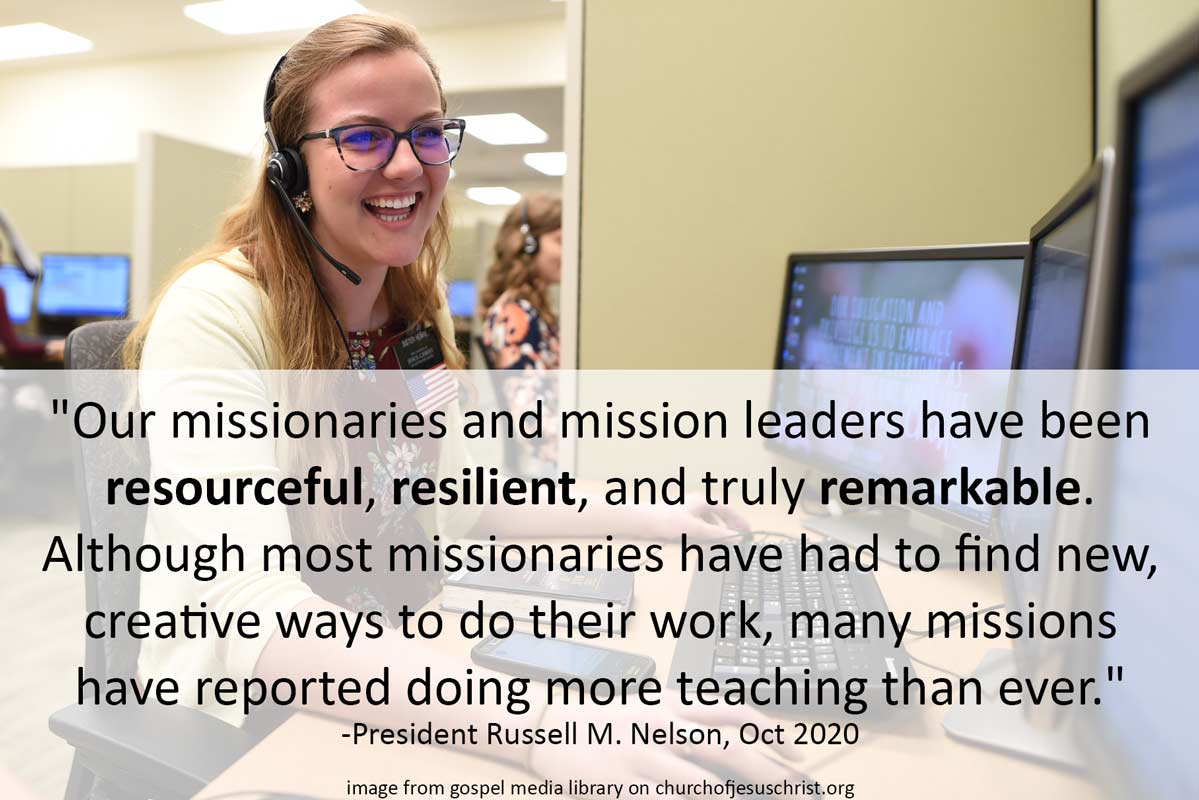 “Our missionaries and mission leaders have been resourceful, resilient, and truly remarkable. Although most missionaries have had to find new, creative ways to do their work, many missions have reported doing more teaching than ever.”

God Will Do Something Unimaginable By Elder Dieter F. Uchtdorf

“Many of our missionaries are busier than ever. Many are teaching more people than ever. There is an increased connection between members and missionaries. …In Latvia, a woman who had discovered the Church by clicking on an internet ad was so excited to learn about the gospel of Jesus Christ that she showed up to her appointment an hour early, and before the missionaries ended the first lesson, she asked for a date to be baptized.”

Be of Good Cheer By President Dallin H. Oaks

“Even though the Saints were not settled in their new homes, at October 1849 general conference a new wave of missionaries was sent out to Scandinavia, France, Germany, Italy, and the South Pacific. At what could have been thought their lowest level, the pioneers rose to new heights. And just three years later, another 98 were also called to begin to gather scattered Israel. One of the Church leaders explained that these missions “are generally, not to be very long ones; probably from 3 to 7 years will be as long as any man will be absent from his family.””

I Believe in Angels By Elder Carlos A. Godoy

“The first angels that I will mention are the two sister missionaries who taught me the gospel when I was a young man: Sister Vilma Molina and Sister Ivonete Rivitti. My younger sister and I were invited to a Church activity where we met these two angels. I never imagined how much that simple activity would change my life.My parents and siblings were not interested in learning more about the Church at that time. They were not even willing to have the missionaries in our home, so I took the missionary lessons in a Church building. That small room in the chapel became my “sacred grove.””

We Talk of Christ By Elder Neil L. Andersen

“With those around us, let us be more open, more willing to talk of Christ. President Nelson said, “True disciples of Jesus Christ are willing to stand out, speak up, and be different from the people of the world.” Sometimes we think that a conversation with someone needs to result in them coming to church or seeing the missionaries. Let the Lord guide them as they are willing, while we think more about our responsibility to be a voice for Him, thoughtful and open about our faith.”

“If we will allow it, there are many ways this Hebraic interpretation of Israel (“let God prevail”) can help us. Imagine how our prayers for our missionaries—and for our own efforts to gather Israel—could change with this concept in mind. We often pray that we and the missionaries will be led to those who are prepared to receive the truths of the restored gospel of Jesus Christ. I wonder, to whom will we be led when we plead to find those who are willing to let God prevail in their lives?” 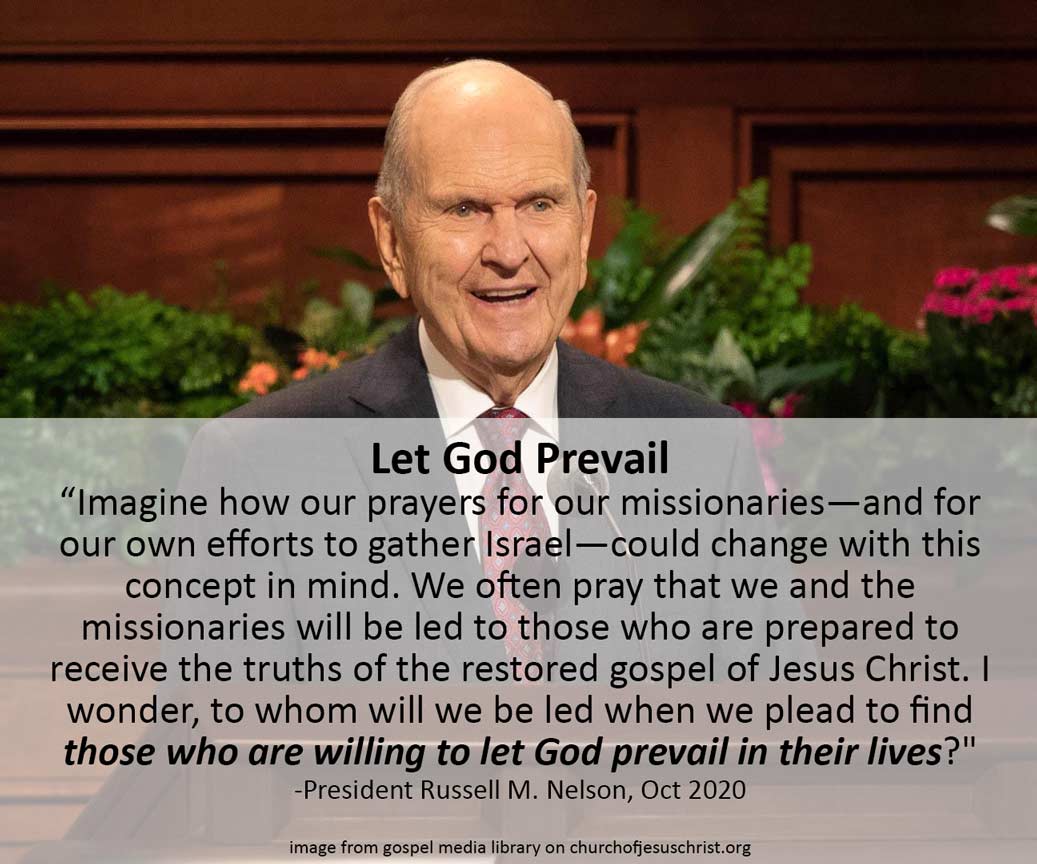 Let Patience Have Her Perfect Work, and Count It All Joy! By Elder Jeremy R. Jaggi

“This past March, our second daughter, Emma, like many missionaries in the Church, went into mandatory isolation. Many missionaries came home. Many missionaries awaited reassignment. Many did not receive their temple blessings before departing to a field of labor. Thank you, elders and sisters. We love you.”

Highly Favored of the Lord By Elder Gary E. Stevenson

“When Sister Kaitlyn Palmer received her mission call last April, she was excited to be called as a missionary but felt it equally important and special to go to the temple to receive her endowment and make sacred covenants. Shortly after she scheduled her endowment, the announcement came that all temples would temporarily close due to the worldwide pandemic. After receiving this heartbreaking information, she then learned she would attend the missionary training center (MTC) virtually from her home. Despite these disappointments, Kaitlyn focused on keeping her spirits high.”

“On August 10, the First Presidency announced that Kaitlyn’s temple would reopen for living ordinances on the exact day her early-morning flight to her mission was scheduled. She would not be able to attend the temple and make her flight. With little hope for success, her family contacted temple president Michael Vellinga to see if there was any way the miracle they had been praying for could be realized. Their fasting and prayers were answered!”

“At 2:00 a.m., hours before her flight departure, Sister Palmer and her family, in tears, were greeted at the temple doors by the smiling temple president with the words, “Good morning, Palmer family. Welcome to the temple!” As she completed her endowment, they were encouraged to move quickly, as the next family was waiting at the temple doors. They drove directly to the airport just in time to make her flight to her mission.”

“The temple ordinances we have missed over several months seem sweeter than previously imagined as temples around the world reopen in phases.”