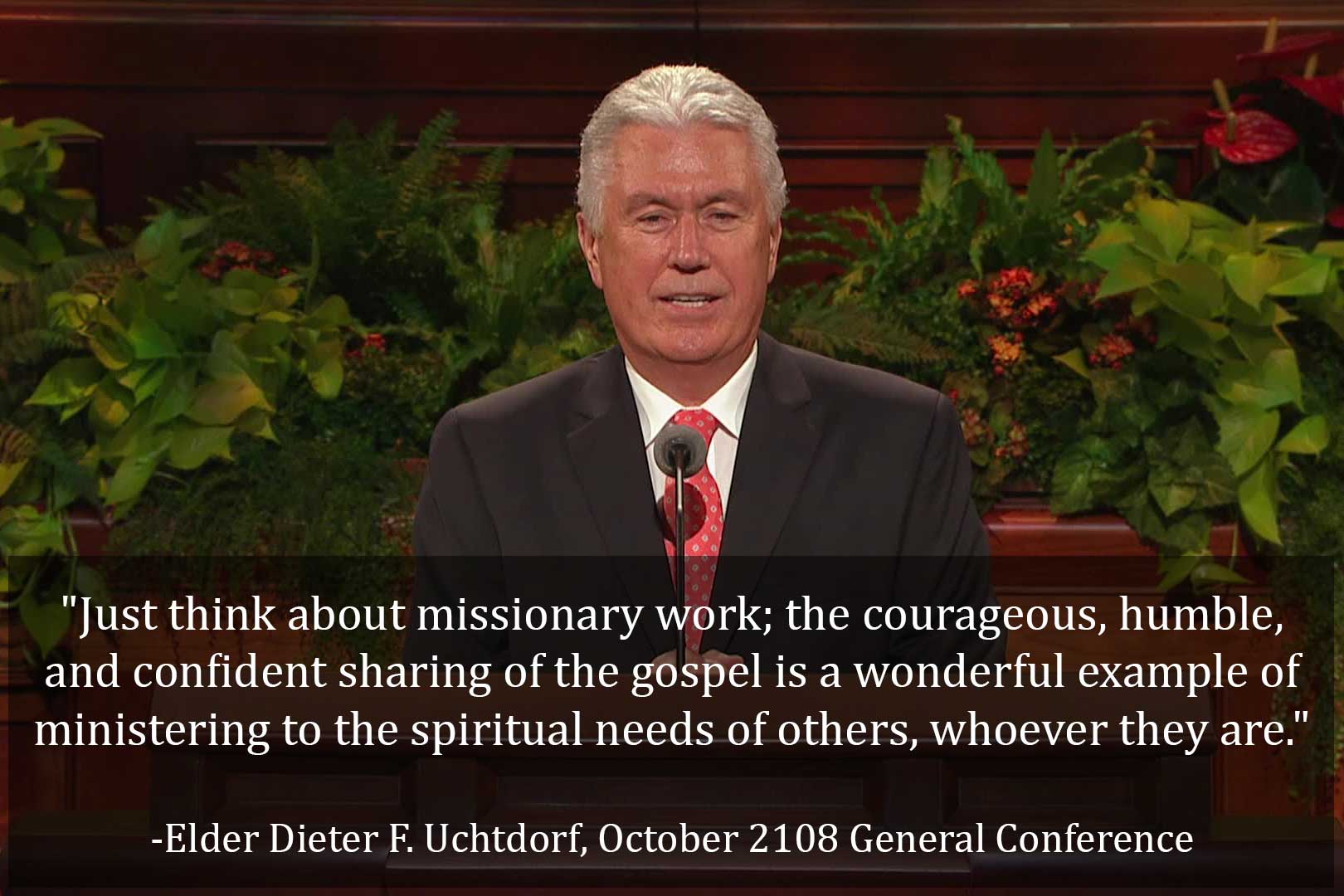 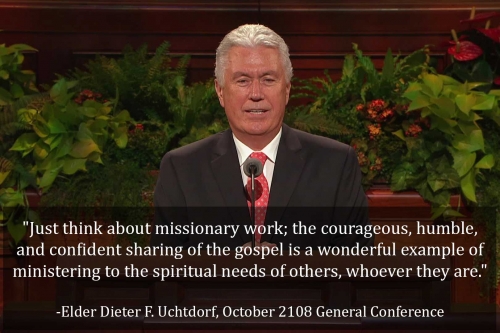 “There is so much more to this adjustment than just shortening the Sunday meetinghouse schedule. President Nelson has acknowledged with gratitude how much is being accomplished as a result of your faithfulness to previous invitations. He and the entire leadership of the Church desire to bring greater gospel joy—to parents, children, youth, singles, the elderly, new converts, and those people the missionaries are teaching—through a home-centered, Church-supported, balanced effort.”

Lift Up Your Head and Rejoice by M. Joseph Brough

“Young people, God requires hard things of you. One 14-year-old young woman participated in competitive basketball. She dreamed of playing high school basketball like her older sister. She then learned that her parents had been called to preside over a mission in Guatemala.

“Upon arrival, she discovered that a couple of her classes would be in Spanish, a language she did not yet speak. There was not a single girls’ sports team at her school. She lived on the 14th floor of a building with tight security. And to top it all off, she could not go outside alone for safety reasons.

“Her parents listened to her cry herself to sleep every night for months. This broke their hearts! They finally decided they would send her home to her grandmother for high school.

“When my wife entered our daughter’s room to tell her our decision, she saw our daughter kneeling in prayer with the Book of Mormon open on the bed. The Spirit whispered to my wife, “She will be OK,” and my wife quietly left the room. We never heard her cry herself to sleep again. With determination and the Lord’s help, she faced those three years valiantly.”

“At the conclusion of our mission, I asked my daughter if she was going to serve a full-time mission. Her answer was “No, Dad, I have already served.” I was just fine with that! But about six months later, the Spirit awoke me in the night with this thought: “I have called your daughter to serve a mission.”

“My reaction was “Heavenly Father, she has given so much.” I was quickly corrected by the Spirit and came to understand that her missionary service was required of the Lord.

“I soon took my daughter to lunch. From across the table, I said, “Ganzie, do you know why we are here?” She said, “Yes, Dad. You know I have to serve a mission. I do not want to go, but I am going.”

“Because she gave her will to Heavenly Father, she served Him with all of her heart, might, mind, and strength. She has taught her father how to do a hard thing.”

Laying the Foundation of a Great Work by Elder Steven R. Bangerter

“Our lives have been blessed by setting aside time on a regular basis to enjoy personal interviews with each of our sons. During one interview I asked our son about his desires and preparation to serve a mission. After some discussion, there was a moment of reflective silence; then he leaned forward and thoughtfully declared, “Dad, remember when I was little and we started having father’s interviews?” I said, “Yes.” “Well,” he said, “I promised you then that I would serve a mission, and you and Mom promised me that you would serve a mission when you got old.” Then there was another pause. “Are you guys having some problem that will stop you from serving—because maybe I can help?”

Truth and the Plan by President Dallin H. Oaks

“We are a missionary people. We are sometimes asked why we send missionaries to so many nations, even among Christian populations. We receive the same question about why we give many millions of dollars of humanitarian aid to persons who are not members of our Church and why we do not link this aid to our missionary efforts. We do this because we esteem all mortals as children of God—our brothers and sisters—and we want to share our spiritual and temporal abundance with everyone.”

“Just think about missionary work; the courageous, humble, and confident sharing of the gospel is a wonderful example of ministering to the spiritual needs of others, whoever they are.”

Sisters’ Participation in the Gathering of Israel by President Russell M. Nelson

“In our worldwide youth devotional last June, I spoke about a young man whose life changed when his parents exchanged his smartphone for a flip phone. This young man’s mother is a fearless woman of faith. She saw her son drifting toward choices that could prevent him from serving a mission. She took her pleadings to the temple to know how best to help her son. Then she followed through with every impression.

“She said: “I felt the Spirit guiding me to check my son’s phone at specific times to catch specific things. I don’t know how to navigate these smartphones, but the Spirit guided me through all the social media that I don’t even use! I know the Spirit helps parents who are seeking guidance to protect their children. [At first] my son was furious with me. … But after only three days, he thanked me! He could feel the difference.”

“Her son’s behavior and attitudes changed dramatically. He became more helpful at home, smiled more, and was more attentive at church. He loved serving for a time in a temple baptistry and preparing for his mission.”

The Role of the Book of Mormon in Conversion by Elder Shayne M. Bowen

“As a young missionary going to Chile, I learned a life-changing lesson about the conversion power of the Book of Mormon. Mr. Gonzalez served in a respected position in his church for many years. He had extensive religious training, including a degree in theology. He was quite proud of his biblical expertise. It was obvious to us that he was a religious scholar.

“He was well aware of the missionaries of The Church of Jesus Christ of Latter-day Saints as they went about their work in his home city of Lima, Peru. He always wanted to meet with them so that he could school them in the Bible.

“One day, almost as a gift from heaven, so he thought, two missionaries stopped him in the street and asked if they could come to his home and share the scriptures with him. This was his dream come true! His prayers had been answered. Finally, he could set these misguided young boys straight. He told them that he would be delighted to have them come to his house and discuss the scriptures.

“He could hardly wait for his appointment. He was ready to use the Bible to disprove their beliefs. He was confident that the Bible would clearly and articulately point out the error of their ways. The appointed night came, and the missionaries knocked on the door. He was giddy. His moment had finally arrived.

“He opened the door and invited the missionaries into his home. One of the missionaries handed him a blue book and bore a sincere testimony that he knew the book contained the word of God. The second missionary added his powerful testimony of the book, testifying that it had been translated by a modern prophet of God named Joseph Smith and that it taught of Christ. The missionaries excused themselves and left his home.

“Mr. Gonzalez was so disappointed. But he opened the book, and he started to leaf through its pages. He read the first page. He read page after page after page and didn’t stop until late into the afternoon of the next day. He read the whole book and knew that it was true. He knew what he had to do. He called the missionaries, received the lessons, and gave up the life he had known to become a member of The Church of Jesus Christ of Latter-day Saints.”

Mission Report from Senior Missionaries after 18 months of Teaching Institu...

Modesty in Principle and Practice
Scroll to top